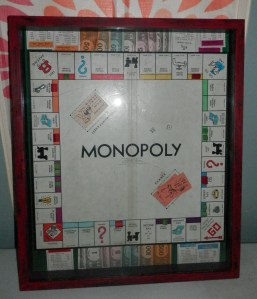 My husband and I bought a 1946 Monopoly game when we were antiquing in Colorado.  I love vintage games and am planning on designating an area in our restaurant for displaying games especially since I have a few from my childhood that I can’t seem to part with.  I had the shadow box type frame already from an auction a long time ago which worked perfectly. All I had to do was take it apart to take the previous art work out, glue the Monopoly board down and all of the pieces. Since I’ve never been a big monopoly player I enlisted my sister to help me lay out the pieces to where it looked like a game in progress. I called my brother to tell him about this project and to reminisce about the time I played monopoly with him and his friends and they teased me about being put in jail and made me cry.  (I think that is why I never really liked the game)  The last thing I did was paint the frame the 1st coat  black and then the 2nd coat red. So it has a two tone effect – black & red- once I distressed it.  Then my husband attached the frame to the back board with his nail gun. Now I just have to get the wall ready that I am going to display this on which includes taking off wallpaper- Ugh! But I am motivated now that I have this 1st game project done.